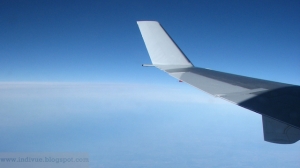 Oh, it was really refreshing and nice to read from Goa Times today, how Finnair flight attendants were performing a Bollywood danceshow inside the Finnair airplane before the flight departure from Helsinki to Delhi.

This is how the Hindustan Times wrote about the event:
“That’s the surprise Finnair had in store for its passengers bound for New Delhi from its headquarters Helsinki on the Repubic Day Jan 26 when some 50 crew members danced to the tune of the title song of Bollywood film Om Shanti Om directed and choreographed by Farah Khan.
Really wonderful and an awesome performance to honour Indian Republic Day. We have to appreciate the universal love and friendship that Finnair extended, wrote Rajendran Krishnan on the airline’s blog.”

I’d also give pluspoints for the girls with their neat Salwar Kameez -costumes,

since in the Bollywood-movies the Western dancers are almost always in as minimum clothing as possible, unlike their Indian counterparts.

Pluspoints for Finnair’s flights also – Ever since Finnair started flights from Finland to India, Indivue has used mainly their service, because the flights have always been good and secure, without forgetting that they are also the fastest flights from Europe to India.