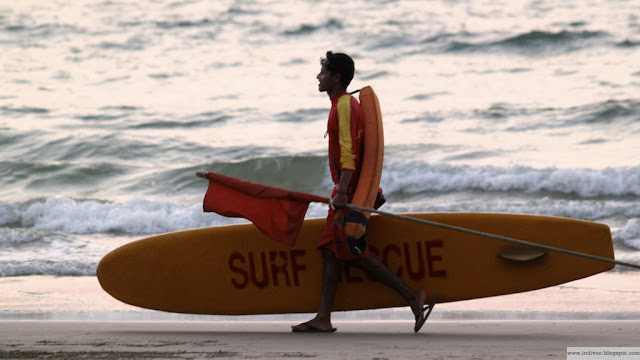 Many of Goa’s beaches are now safer for swimming

since swimming supervisors and rescue cars have become part of the daily scene of the beaches.
The Goan coastline is marked with flags, which indicate
where it is safer to swim and / or how far the waves will rise.
The swimming can be dangerous because the ocean makes powerful underwater eddies,
which can take the inexperienced swimmer along, and therefore it’s good for one to be aware of them.
I’ve often read the news, how Goan fishermen or shore employees have been able to rescue the helpless victims of eddies, but the opposite also happens.
According to my knowledge the eddies are harmless if you are just wading in the low seawater outside the monsoon season.

2 replies on “Betterment of safety on Goa beaches”

[…] Betterment on safety on Goan beaches […]

[…] Betterment on safety on the Goan beaches […]